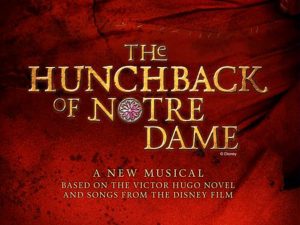 Morris Park Players is holding pre-auditions to cast the lead actor (Quasimodo) for our Fall 2020 production of Disney’s, ‘The Hunchback of Notre Dame.’

We are specifically seeking actors who are D/deaf or hard of hearing. Must be an exceptional actor with great physical abilities both in movement and storytelling. Auditioners should prepare to read/perform ‘Made of Stone, or ‘Out There’ in ASL. Please dress for movement.

Quasimodo is canonically D/deaf, both in the novel and musical adaptation of ‘The Hunchback of Notredame. We are interested in the authentic storytelling opportunities that will come with casting a D/deaf or HoH performer in this role.

Quasimodo is the bell-ringer of Notre Dame and Claude Frollo’s charge. Lonely and staunchly obedient to Frollo, he possesses a vivid imagination that brings to life the bells and gargoyles of the cathedral. Despite his shyness and uncertainty, he quickly befriends Esmeralda. Big-hearted, and brave when need be.

Auditions for the rest of the cast of Hunchback, including the voice of Quasimodo, will be held mid-July.

REHEARSALS + PERFORMANCE DATES:
Rehearsals start after Labor Day. The show opens October 23rd – November 8th Backstage interpreter will be provided. Shows are Fridays and Saturdays at 7:30, and Sundays at 2:00. All shows will be ASL interpreted.

Morris Park Players embraces a non-traditional casting approach to our productions – seeing the possibilities that exist when the roles are cast against stereotype. “Non-traditional casting” is defined by Actors Equity as “the casting of ethnic, minority, or female actors in roles where race, ethnicity, or sex is not germane to character or play development.”

Rehearsals will begin after Labor Day.

The show runs October 23rd – November 8th. Backstage interpreter will be provided. Shows are Fridays and Saturdays at 7:30 PM, and Sundays at 2:00 PM. All shows will be ASL interpreted.